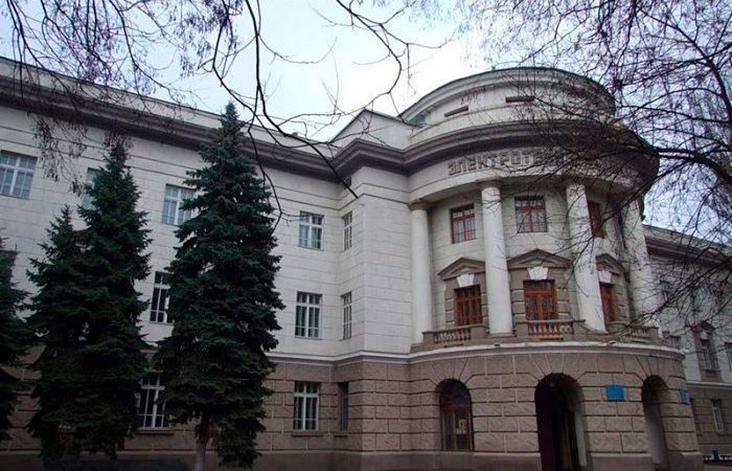 On the verge of two previous centuries telegraph used to be the general mean of electrical communication.

In 1900 Higher Telegraph Mechanics Courses were opened in Odessa for technicians’ training in the southern part of Russia. The Courses were housed in 16 Staroportofrankovskaya Str.

The first sitting of Odessa District Committee was held in the Courses building. V.F. Didrikhson, a prominent lecture and electrical engineer, and E.A. Bukhgaim, future professor of the Institute, were the members of that Committee.

At the Congress of Railway Electrical Engineers and Telegraph Authorities, which took place in Odessa (1897), it became evident that electrical engineering of weak currents had revealed a great number of problems worth separate scientific investigation. A.S. Popov’s demonstration of wireless telegraph operating at the Congress became weightly argument on behalf of such investigation and aroused public enthusiasm and standing ovation.

Some private radio and telegraph stations accomplished practical needs in communication in Odessa during the Revolution and Civil War period.

In 1919 all that few stations were reorganized into Odessa State Radio and Telegraph Plant (ORTP in Sofievskaya Str.), the first one in Russia.

In 1923 ORTP stopped its independent functioning. The same year in the building of former Higher Telegraph Mechanics Courses educational process was renewed but that time it was named after former Ukrainian Minister of Education Grinko and was called Odessa Higher Strong Currents Electrotechnical School (OHES).

OHES graduates gained their engineer qualification in the course of four-year training. In 1925 at High Electrotechnical School there was organized Weak Currents Department having three small groups of telegraphists, telephonists and radio operators. Since then Odessa had begun training engineers of communications and the first official graduates appeared in 1925.

S.M. Plakhotnik was one of the first scientists in the Soviet Union who designed a TV set, its operation was demonstrated in the Odessa Opera and Ballet Theatre for the participants of Regional Soviet Congress. Later he presented Marshal of the Soviet Union K.E. Voroshilov with the improved model of the TV set in 1933 when an anniversary of the Red Army was celebrated in Moscow.

In 1935-1937 distance television transmission from Odessa to Moscow was realized under the guidance of S.M. Plakhotnik for the first time in the Soviet Union.

Since 1937 V.A. Nadezhdin, a Military Communications Academy graduate, had headed the Institute.

When the Great Patriotic War burst out the Institute was in the period of its prosperity.

Since the very first war days an extremely intensive work had started against fascist invasion. To some extend, it was promoted by so-called pre-war “military” groups of Institute graduates whose training had been accomplished according to special programs Owing to that fact, the Red Army was remanded with sufficient number of skilled commanders for communication subdivisions. A great many of them became senior officers and generals. For instance, the military rank of lieutenant general was awarded to the 1941-year graduate N.N. Smirnitsky. After the war he became the USSR State Prize winner for his great contribution to machine building development. Some of communication graduates were the participants of historical events of paramount importance. For instance, the 1941-year graduate F.T. Kanivchenko was in command of communication service regular functioning for Supreme Commander-in-Chief at Teheran and Yalta International Conference, and the graduate of 1934 A.G. Moldovanov was the head of Radio Communication unit, through which information was transmitted to Moscow and Paris from the place of signing documents on unconditional Germany surrender.

But all that happened later. At uneasy period of war beginning, when future graduates were to present their Diploma projects, they went to the Military Commissar Offices to take part in the war without waiting for their Diplomas receiving. A great many of lecturers and students voluntary joined the military divisions that patrolled their native city.

In July 1941 the Institute was being actively prepared for evacuation. In the laboratory buildings equipped with untransformed radio stations, telegraph laboratory and diesel power station of guaranteed electricity supply, a special Maritime Army Communication Center was organized there, which would play a very important role in Odessa heroic defense. Because of communication efficient operating Odessa was left unruined but the laboratory buildings as important military units were destroyed. The Institute was evacuated to Guryev town situated on the Kaspian Sea shore. But lack of necessary buildings caused unworkable state for the Institute. For that reason the Institute was transferred to Tashkent city. Moscow Institute of Communications had already been there. For rational use of laboratory equipment and lecturers’ staff both institutes were united into one.

V.A. Nadezhdin was appointed the Director of joint Institute in April 1942. In summer 1944 the decision for renewal of Odessa Electrotechnical Institute of Communication Engineers was admitted.

Both old and new pre-war Institute laboratory buildings had been absolutely ruined and they couldn’t be restored.

There had been German military hospital in educational building (at present it is laboratory building 1).

The result of extremely difficult organizational measures on the hospital eviction became desks manufacturing and laboratory stands producing in October 1944 when first 60 students entered the Institute for the first time after Odessa liberation from fascists’ invaders.

The students lived and studied in the same premises. Half-ruined building of students’ hostel in Manezhnaya street was temporarily occupied by the lecturers returned to the Institute, and the building in Ostrovidov street was occupied by OMD Headquarters. Soon after the war the legendary Victory Marshal G.K. Zhukov worked there. There is a memorial plate there on the building.

Victorious end of the war against Hitler Germany couldn’t bring killed people back. A great many of lecturers and students were lost in that war. Memorial Stella was mounted in front of the main institute building with students’ and employees’ money as their memorial obligation.

Front-line soldier students brought the atmosphere of discipline and responsibility on the institute life. It helped in educational process in hard post-war time and influenced next student generations.

In 1948 Reader I.P. Pishkin was appointed the Head of the Institute.

In 1954 under his leadership one of the first USSR experimental television centers was created with captured radio details using, it also served Odessa city needs.

Great attention was always paid to the physical training of students. There was a lot of sport records gained both in individual and team competitions. Former tank-officer B.D. Faktman was the head physical training chair in post-war period and owing to his great efforts the Institute had great sporting fame.

Alongside with educational process, scientific research work was being revived too. It should be mentioned that in 1959 the country five-hectare scientific training ground was created, and “Meteor” SRW, headed by A.I. Khachaturov, where many outstanding scientists of the Academy started their scientific activities.

Odessa citizens and numerous visitors of our city listen with great pleasure to the music of I.O. Dunayevsky, which is heard from Odessa chiming clock, built at the Institute in 1959. Chimes sounding has become the original symbol of Odessa.

The beginning of educational process in a new building (September, 1953) turned to be a very important event in the Institute life and to great extent it became its new birthday. There, in the new building, the students who entered the Institute in 1954 had started their studies and their graduation year turned to be the most fruitful in the Institute history, they gave 7 Doctors and 46 Candidates of Technical Sciences. They became the State Prize winners (I. Dezhurny, H. Shutko), the USSR Soviet of Minister Prize winners (A. Zhadan), the USSR EAPE Gold medal winner (A. Kogut).

In 1953 the Correspondence Department was organized at the Institute, then in 1956 the Part Time Evening Department, in 1962 ECC in Kishinev City, and in 1967 Kiev Correspondence Department which became the base for Kiev Institute of Communications of further creation. Since 1965 there at the Institute has been functioning the Scientific Board for Candidate theses presenting in the following specialities: “Theory, systems and devices for information transmission in communication channels”. Since that time 151 Candidate theses have been presented there.

In 1967 the Institute was named after A.S. Popov in accordance with the USSR Cabinet of Ministers Resolution. In 1980 for successful training of communication engineers and scientific researches developing the Institute was awarded with the State Official Honorary Diploma by the Ukrainian Presidium of Supreme Soviet.

The International Division (ID) of the Academy was founded on the base of O.S. Popov Odesa Electrotechnical Institute of Communications Dean’s office for foreigners in 1993. It was done to develop international links and organize foreign citizens education. (the order № 01-05-76 dd. 07.07.93).

ID co-operates with the major Academy departments and proper Chairs, where foreigners study as well as with the Chair of Foreign Languages.

Main tasks to be implemented through the ID are the following:

establishing ties, preparing and making the agreements on cooperation with foreign higher educational establishments, firms and the organisations, and also the control over their carrying out;
taking part in the organization and the conducting the international scientific and engineering, scientifically-methodological conferences, symposiums, exhibitions, etc.;
preparation and organisation of foreign delegations reception and welcoming, as well as some foreign establishments representatives;
correspondence with foreign partners in all international activity aspects;
the organisation of the Academy staff and students foreign business trips;
the organisation of foreign students and postgraduates educational and pedagogical process; attracting them to study; sending invitations; foreign students’ reception and welcoming; making up educational contracts; placing in hostels; foreign students’ status report and its preparation; passports and visas; advertising-informational activity; education diplomas validation and legalization, etc.
translations during negotiations, international symposiums, conferences, seminars, etc.