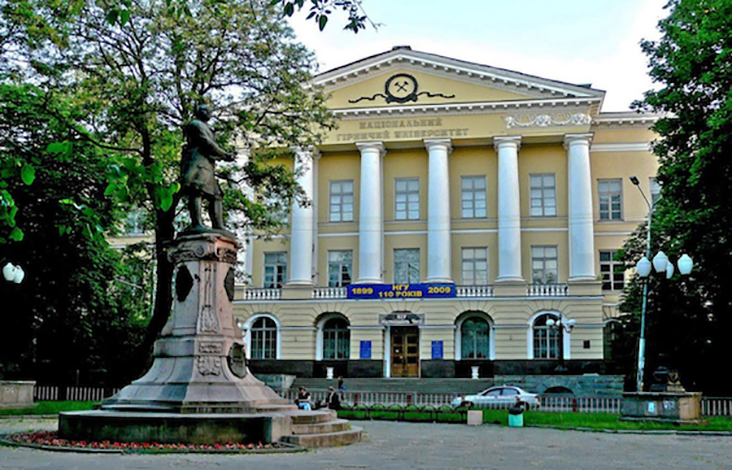 At the very beginning there was founded a two department library, a mineralogical museum, chemical, mechanical and probe laboratories, cabinets in each disciplines. Nevertheless the College had a lot of problems for a long time. Ten years after KHMC establishment there were only 9 teachers, and a stable cadre leakage took place. This made it urgent to equal the Technical School in rights with higher educational institutions and to turn it into Katerinoslav Mining Institute. On June 19, 1912 the State Legislative body adopted a bill on restructuring the KHMC into Mining Institute since July 1. At that time there worked outstanding scientists, mainly graduates from Saint-Petersburg Mining Institute. They were Ya. Grdina, V. Guskov, S. Zaborovskiy, L. Ivanov, N. Lebedev, P. Leontovskiy, V. Makovskiy, L. Pisarzhevskiy, M. Protodiakonov, P. Rubin, A. Terpigorev, M. Fedorov, S. Sharbe.

The publications of scientific works in technical periodical journals, monographs, study books, atlases testified of high scientific potential of the educational institution. The KHMC systematically edited “News of Katerinoslav Higher Mining College” since 1905. Up to 1917 there had been edited 23 collections of “News”, published about 500 scientific works including monographs and study books. In the period of the educational institution formation there were established scientific schools and directions: Ya. Grdina became one of the founders of cybernetics, A. Terpigorev and V. Protodiakonov – the school of mining, V. Guskov – mineral dressing, Leontovskiy – the school of surveying, geodesy and geometry of deposits, M. Lebedev – geology and stratigraphy of Donbass, P. Rubin – metallurgy and coke chemistry, L. Pisarzhevskiy – electron chemistry.

In 1918 Katerinoslav Mining Institute opened two new departments: Surveying (closed in 1921) and Geological Prospecting, and obtained the right to award the scientific degree through public defense of scientific dissertation. In 1921 there was created the Mechanical Faculty with two departments: Mining-Factory and Electrical Engineering. The implementation of new specialties was dictated by industry development. Besides, a Working Faculty was opened.

Beginning since 1930 Mining Institute started training specialists only for mining industry and geological prospecting works. In 1932 there were established faculties instead of the departments: Mining, Electrical Engineering, Geological-Surveying.

In 1920-1930 the process of forming scientific schools was continued. Though during the 30-th Dnipropetrovsk Mining Institute lost a significant part of its cadre staff (about 30 persons, among which there were outstanding professors) because of political repressions.

The Great Patriotic War in 1941-1945 recruited to the front about 300 teachers, staff members, students only on its first days. The institute evacuated to Sverdlovsk and Karaganda, brought a significant part of its equipment and the scientific staff for Sverdlovsk Mining Institute and the Filial of Moscow Mining Institute, which by that time had come to Karaganda too. A great deal of the teaching staff of Dnipropetrovsk Mining Institute occupied engineering positions at mining enterprises of the Urals and Republics of Middle Asia.

The activity of the Institute was renewed in 1943, first – in Karaganda, and later – in Dnipropetrovsk. Destroyed educational facilities and laboratories were under reconstruction. Those who survived were coming back from the front. By 1951/1952 academic year there had been completely renewed all the buildings of the Institute, put into operation a boring experimental study range, laboratories, dormitories. In 1951 there was established the Mine-Construction Faculty. Scientific elaborations of the Institute’s teaching staff, student diploma projects of that period were subordinated to the problems of renewing Donetsk, Kryvyi Rig and Nikopol-Marganets basins. On November 21, 1949 Dnipropetrovsk Mining Institute was awarded with the Order of the Red Banner of Labor and a number of its staff members received the highest government awards (26 orders and 17 medals) for scientific achievements and success in training engineering and technical staff for the national economy.

By the 50-th anniversary the Institute had 165 professors, associate professors and lecturers, 34 departments, 22 laboratories, 25 cabinets, a geological museum, library, experimental study range and study experimental workshops. At 4 faculties there studied 1942 students by 9 specialties.

In the 60-th new-built educational and educational-laboratory buildings, three multistoried dormitories for students and post-graduate students, educational-production workshops, a sport building, facilities of an educational-geodesic experimental study range in the village of Orlovschina were put into operation.

In 1970 at Dnipropetrovsk Mining Institute there worked 474 teachers, including 34 professors. The amount of graduating engineers equaled 1200 persons. The amount of specialists prepared by full-time education was increasing, though part-time and extramural study forms also functioned.

In May 1993 according to the results of State accreditation Dnipropetrovsk Mining Institute gained the status of an autonomous IV-accreditation level state higher educational institution and the name of the State Mining Academy of Ukraine. In 1997, the President of Ukraine issued a decree to award the Academy the national status. In February 2002 the institution was restructured into the National Mining University. Today it is one of the leading higher educational institution of the country in geological prospecting and mining fields. The University graduates possess the knowledge in modern computer technologies, and are capable of solving complicated problems of industry, economics and law development.

At the University there study 12000 students, post-graduate and doctoral students in 27 modern specialties. The licensed amount of student admission for entering the University is 1400 students. The academic process is provided by 600 teachers including more than 100 Doctor of science, professors and 350 Candidate of Science, associate professors. A high quality of education is guaranteed due to the developed infrastructure of the University (general area of constructions and buildings is 126049 square meters estimated at 29,8 mln. hryvna cost), modern computer basis (more than 1000 modern computers) local and global computer nets, library funds with more than one million of volumes, strong material and technical laboratory basis, newest technologies of education.

Over 100 years of University existence more than 56000 highly qualified specialists have been prepared, more than 500 monographs and 250 study-books widely known beyond Ukraine have been issued. There have been trained about 150 Doctors of science and more then 1750 Candidates of science. The University Scientists are authors of more than 2600 inventions in foreign countries, where they obtained more than 300 patents. Over the last time 4 fundamental elaborations of University’s scientists have been recognized as scientific discoveries.

Department of International Relations (DIR) is a separate structural division of the State Higher Education Institution «National Mining University». The main objective of the Department is ensuring effective international activity of the University, mutual and task-specific collaboration with educational and research institutions in different countries, creation and development long-term relations with foreign partners on the basis of parity and mutual interest, exchange of intellectual resources, development of academic mobility and strengthening intercultural and business relations.