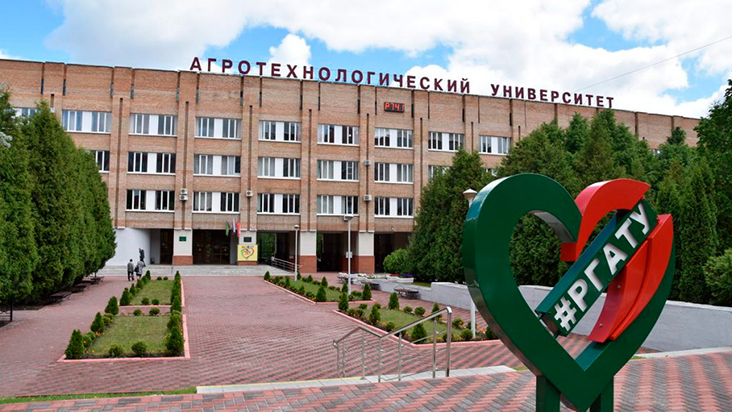 The history of the Federal State Budget Educational Institution of Higher Professional Education «Ryazan State Agrotechnological University Named After P.A. Kostychev» lasts more than sixty years. On May, 18th 1949 the Council of Ministers of the USSR accepted the solution to found the Agricultural Institute in Ryazan. On May, 30th 1949 Ryazan Agricultural the Institute was named after Pavel Andreevich Kostychev by the resolution of the Ministry of Higher Education.

In 1949 Ryazan Agricultural Institute Named after Professor P.A. Kostychev set about studying the first students on specialties «Agronomy» and «Zootechnics».

Having passed a great way of formation and developing the University has turned to be one of the biggest agrarian universities of the Russian Federation. Today FSBEI HPE «Ryazan State Agrotechnological University Named after P.A. Kostychev» is a multi-field institution that has got a license and state accreditation. It is a big educational and scientific center.

Today the University uses computers and different information technologies in the training process. It presupposes the practical study and integration of the educational process and science. The institution has been among the first in Russia to start the target specialists training under contract with the Ministry of Agriculture and Food of Ryazan oblast and the Government of Ryazan oblast.

The University prepares the personnel for enterprises of the agro-industrial complex of Ryazan oblast and other branches of industry (Tula, Tambov, Moscow, Lipetsk, and others) as well as for the city enterprises connected with production, processing, and realization of food, building, road transport, planning and accountability, social work.

Due to a wide range of specialties all the graduates of the University get a good job and do not regret choosing their professions.

There are 460 teachers working at the University. There are 71 Doctors of Science and 240 Candidates of Science among them. All the departments possess training areas in detached buildings. They include laboratories, libraries, and computer classes.

Our University has rich and wonderful traditions that many generations of students treasure and increase. During its activity, the University has prepared more than 35 thousand specialists including engineers (mechanic engineers, electrical engineers, automotive engineers, machinists, and others), accountants, economists, merchandisers, ecologists, agronomists, technologists, zoo-engineers, veterinarians and others.

During all time of studying at university foreign students are supported by a qualified team of the International Department. All their needs will be satisfied with pleasure. There is a very helpful consultancy for students who have educational difficulties. University has its own security system.

All university hostels are secured and have time restrictions for guests to ensure safety and good condition of living. The Russian people are well-wishing and peaceful. The city is secured by powerful police system observation. There is no racism at all. So, welcome, Russia is waiting for you!

Ryazan is the administrative center of the Ryazan region, one of the oldest Russian cities (in 2000 it celebrated its 905 anniversary).

Ryazan is situated on the right bank of the river Oka. The area of the city is 175,6 sq.km.

The cultural life of the Ryazan region is rich and diverse. There is the regional Drama Theatre, the Theatre for the Youth, the Puppet Theater, the regional Concert Hall, which has branches all over the region, the Ryazan Circus, the Museum of Arts, Municipal Cultural Center, the Palace of the Youth Creative work, a number of museums in Ryazan that are the home-places of the outstanding citizens of Ryazan who have won the glory of our region.

In the Ryazan region, there are more than 40 scientific-research and designer organizations.

In the Ryazan region, there are 11 Institutes of Higher Education including the largest of them – Radio Technical and Agricultural Academies, Pedagogical and Medical Universities & others. Every year about 4 thousand young specialists with higher education graduate from them.

The system of railways and motor roads in the region: 3 railways and 3 motor roads of federal importance completed with local lines, gives the opportunity to organize the delivery of any cargoes with minimal costs. Developed structure of locomotive depot, motor transport enterprises provide services for transportation of freights and passengers by transport, based on the territory of the Ryazan region.

The main waterway, the Oka River, connects the Ryazan region directly with the Moscow, Vladimir, Nizhny Novgorod regions giving the way to the Volga basin. There is a well-equipped river port in Ryazan. At the present time there is a large transport terminal of interregional importance, which was built on the outskirts of Ryazan on the basis of the existing storage facilities.