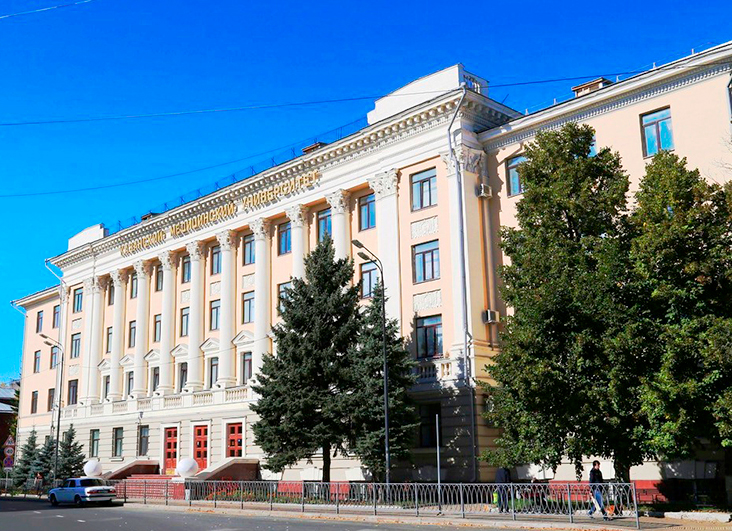 Clinical training is performed at 54 units of the Ministry of Public Health of the Russian Federation. There are 33 general hospitals, outpatient departments, 21 polyclinics, maternity houses, dental polyclinics, etc. The total number of beds is 8 600. There are 4 315 therapeutic, 2 120 pediatric, 1 210 surgical, and 440 gynecological beds.

The basic branches of the departments of pediatric faculty are the investigations of the age peculiarities of pathology and the normal state of the child. They work out the problems of adaptive possibilities of children, immunological reactivity in acute and chronic inflammatory diseases, diagnosis and endotoxicosis treatment in childhood, and micro ecology of the child.

The departments of therapy perform scientific research work in the fields of prophylactics and effective treatment of cardiovascular diseases. The priority trends are the investigations of the pathogenesis membrane mechanisms of hypertension, atherosclerosis, myocardial infarction, and rheumatoid arthritis.

Surgical departments are the leaders of Russian medicine in the field of laser surgery and endosurgery.

The regional center of cardiovascular surgery is formed in one of the departments of the university.

The faculty of prophylactic medicine deals with the problems of ecology, environmental pollution in oil fields. They created the program of training doctor-ecologist for all medical institutions of Russia.

There are hospitals, maternity houses, special diagnostic centers, out-patient units, and 20 polyclinics including dental and children’s. Clinical units have 8 600 beds. University dental polyclinic has 98 dental chairs. Republican and 8 city centers of sanitation and epidemiological control with the specialized departments and laboratories are used for teaching the students of prophylactic medicine faculty.

Dorms consist of eight rooms per floor, with 2-3 people per room. Each floor also has one kitchen and two toilets, and the basement has a shower. Students cannot select their own rooms. We encourage students to apply early, as the number of rooms is limited. Some students may not be comfortable with dorm rules, as they are often considered strict.

All Dormitories have the following facilities:

Kazan is the capital and largest city of the Republic of Tatarstan, Russia. It is a major industrial, commercial, and cultural center and remains the most important cultural center of the Tatar culture. With a population of 1 143 535, it is the eighth-most populous city in Russia. Kazan lies at the confluence of the Volga and Kazanka Rivers in European Russia. Kazan is located 793 Km east of Moscow. Kazan is a place where the East meets West.

The origin of the name Kazan is unclear. The literal translation of the word Qazan is «Boiler or Cauldron». It is believed that the city of Kazan is named after this object and its geographical similarity with «Qazan-pan»; namely, the city is situated in U-shaped low land. The way from the capital of Russia, Moscow to Kazan takes 1 hour 20 minutes by plane and around 10 hours by train. People of different nationalities live in Kazan. Major religions in Kazan are Sunni Islam and Eastern Orthodoxy. You can hear the speech of more than 100 different nationalities in Kazan. The official languages are Tatar and Russian.

Kazan was founded in 1005. Despite such a venerable age, the city is growing and dynamically developing in all aspects. Since April 2009, Kazan has been granted the legal right to brand itself as the third capital of Russia. In 2004, Kazan was named the best city of Russia and became the winner of the Russian public award «Russian National Olympus». With a rich history and culture, it is a host to a number of monuments. The Kazan Kremlin (citadel) is a UNESCO World Heritage Site. Major monuments in the Kremlin are the 5-domed 6-columned Annunciation Cathedral (1561-62) and the mysterious leaning Soyembika Tower, named after the last queen of Kazan and regarded as the city’s most conspicuous landmark. Other structures of interest are: the towers and walls erected in the 16th and 17th centuries but later reconstructed; the Qol-Sharif mosque, which is already rebuilt inside the citadel; remains of the Saviour Monastery with the Spasskaya Tower; and the Governor’s House (1843-53, now the Palace of the President of Tatarstan.

Kazan is a significant educational and cultural center of Russia. Kazan has traditionally been a university city and only Moscow and Saint Petersburg have more students. With 44 institutes of higher education, around 25 colleges including colleges for special training, 178 schools, and over 50 schools for learning music, choreography, fine arts to name a few. Among them, there is the Kazan Federal University founded in 1804 with the faculty composed of and including the world-renowned scientist. Kazan offers education for every taste. There are lots of museums, libraries, concert halls, theaters in this city. Two renowned international festivals: the opera festival named after F.I. Shalyapin and the classical ballet festival named after R. Nuriev have been regularly held for a period of many years.

In 2009, Kazan was chosen as «Sports Capital of Russia» and it is still referred to as such. Apart from being a home for Ice-Hockey Team «Ak Bars Kazan», it has a football team by the name of «Rubin Kazan». Few notable international events hosted by Kazan include — 2013 Summer Universiade, World Fencing Championships (2014), European Weightlifting Championships (2011 ), Bandy World Championship for men (2005 & 2011). Kazan is the host city for the 2015 World Aquatics Championships, 2017 FIFA Confederations Cup, and 2018 FIFA World Cup.

Kazan is a city of Peace and Calm. The people of Kazan are noted for their affability, hospitality, and religious tolerance. The best example of this is the Mosque and the Church standing next to each other in the Kazan Kremlin. Another example is the temple of all religions. Kazan is one of the largest industrial and financial centers of Russia, and a leading city of the Volga economic region in construction and accumulated investment. The main industries of the city are mechanical engineering, chemical, petrochemical, light, and food industries. An innovative economy is represented by the largest IT-park in Russia which is one of the largest of its kind among Eastern Europe science parks.

Kazan is connected by buses, railways, river port and an international airport. The public transport system is extensively developed and is used by a large number of people for daily commuting. It consists of buses, trolleybuses, trams, and metro(subways).